OSHA’s Enforcement Budget Need Not be Limited by Expense Concerns

Every year as part of the budget process, OSHA submits its request for funding. For 2013, OSHA requested $565.5 million, just under the 2012 appropriated amount of $565.8 million. Full details may be found in the “FY 2013 Congressional Budget Justification Occupational Safety and Health Administration.” 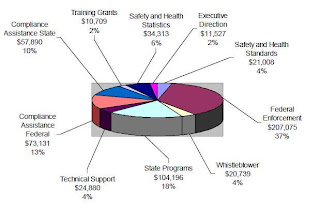 The federal enforcement part of the budget is an appropriation of $207 million and 1, 580 FTEs (full time employee equivalents), which OSHA anticipates using to conduct a total of 43,100 federal inspections – 35,215 safety inspections, and 7,885 health inspections, compared to 40,961 inspections in 2012 (federal only).


There have been many discussions concerning the cost of enforcement versus the need to improve workplace safety and the limited resources available to OSHA (see also BP and West fertilizer). As Randy Rabinowitz pointed out in the New York Times, with over 8 million workplaces federal OSHA can conduct an inspection of every facility only once every 131 years. However, this argument of limited resources for inspections may be false.

In 2012 OSHA issued a total of $266,988,844 in penalties and collected $173,206,213. The amount of penalties collected is 84% of the federal enforcement budget. All income from OSHA penalties goes directly to the US treasury (sec. 17(l) of the 1970 OSH Act), presumably in order to avoid rich targets being more more heavily inspected.

However, like any large enterprise, costs typically are not linearly scalable with income. Hiring more inspectors will bring in more penalties but the cost will of course be higher. However, out of the operations funded by the $207 million budget for federal enforcement, some part of the funding will be indirect costs (utilities, office personnel etc.) whose costs are not proportional to the number of inspectors. Unless OSHA’s enforcement division is unusually efficient, it is likely that these indirect costs will exceed 16% of the budget.

The debate on whether additional inspection is required to improve safety or an unnecessary burden on industry will undoubtedly continue. However, this decision can be made by the US Congress on policy grounds and not based on budgetary concerns since it is likely that every additional dollar spent will result in at least one more dollar being returned to the US treasury.